The mighty Lake Macquarie has a shoreline measuring 174km, has 11,000 hectares of surface water, is 24km long, 3.2km at the widest point and has an average depth of 9.7 metres. That’s one hell of a waterhole! The most common species caught in the lake are bream, whiting, flathead and luderick, with a few mulloway and tailor as bonus captures.

Macquarie boasts some of the best fishing spots in the state, but the lake is so huge I’d need to write a whole book to cover all the potential fishing areas. Instead, in Part One of this location guide I will focus on some of the better known fishing spots of Lake Macquarie, north-east from Swansea.

From the boat ramp situated at the end of Lake Road, Swansea, out through the channel markers toward Wangi Point is an interesting area in which to begin exploring the lake. The water from the boat ramp to the dropover into the lake is shallow, usually around one metre to 1.5 metres, with small sand islands on the starboard side and a large area of seagrass flats on the port hand. Most boat anglers bypass this area on their way out to the deeper areas of the lake, but believe me – they’re driving over large schools of blackfish and bream. Night fishing here can be very productive, and the area can also fire during the day when conditions are right.

Reaching the end of the channel markers, turn to the north, along what is known as the ‘drop-over’ into the deeper waters of the lake, from the end of the markers to the sand islands bordering the Swansea Channel. The water depth averages eight to 10 metres and is excellent flathead territory. There is tidal influence in this area so drifting baits from the shallow water over the drop-over can produce the goods on the incoming tide. I have also caught good flathead while casting lures along the edge of the deeper water, with the best results coming on soft plastic minnows.

Travelling a little further north past the sand islands we come to the end of the channel markers, which is where the Swansea Channel meets Lake Macquarie. This area is popular with boat anglers and can be a little overcrowded at weekends and holiday times. If you’re fishing this area, anchor a good distance from the end of the marked channel as the traffic in and out of the lake can be pretty heavy at times.

There is a powerful tidal flow in the area from Marks Point around the end of the marked channel to the shallow channels that enter the lake between the sand islands. On an incoming tide the fresh seawater virtually floods across the sandbars that border the end of the channel. This influx of new water stirs up the food chain and brings in schools of baitfish. The resulting feast attracts the larger critters from the lake and channel to this area.

I believe that just about every estuary species (and some from the ocean) invades the sand flats and the drop-over into the lake from Marks Point around to the sand islands. Most locals believe that kingfish come up the channel only as far as Swansea Bridge, but I have seen a school of kingies chasing hardiheads across the sand bar out from Marks point.

The most popular method of fishing this area is to anchor a few metres off the drop-over and cast the baits or lures back into the wash and let them drift into the deeper water. The depth of water here can go from 25cm to a metre deep across the sand bar, then from six to seven metres in the lake – virtually in the length of a small boat.

I may have given the impression that the only time to fish this area is on the incoming tide, but that’s not the case. I have also caught good fish on the first hour and the last two hours of the outgoing tide.

Marks Point Marina is the next point of interest. The water around the moorings is shallow over seagrass, but quality bream and blackfish haunt this area, cruising and taking shelter beneath the moored craft. A good way to fish this location is to use a float to keep the bait just above the seagrass, or cast small lures close to the moorings for bream, and use regular blackfish gear for those stripey critters.

From Marks Point Marina we move out into Belmont Bay. The water depth in most of the bay averages seven to ten metres and there is very little tidal movement. However, there are some strange undercurrents in this area and it’s not unusual to find the boat drifting one way with the small tidal run and the bait drifting in another direction. Belmont Bay is a popular fishing location and a good many local anglers hardly fish anywhere else – and for good reason. Quality bream, flathead, snapper, and mulloway are among the regular bags taken from this area. Schools of tailor also love the bay, and trolling deep diving or weighted lures will produce a bag of smokers, and often a few of the larger greenbacks.

Two good fish-holding features of Belmont Bay are a wrecked yacht and a sunken barge that was carrying a load of pit props. Snapper and mulloway love these wrecks, and so do bream and flathead, so these features are well worth looking for. If you don’t know the exact markers you’ll need a sounder to locate them. Cruise the general area until they show up on the sounder, then mark the spot with a float with a line and lead weights attached. The marker float will help you to stay in the right area if there is a wind on. The best baits over the wrecks are whole pillies, fresh strips of mullet or whole baby squid, rigged on three gang hooks. The best berley is chopped up chunks of pillies.

The Belmont pier and the swimming pool boardwalk are also popular fishing spots for land-based anglers. Some nice fish are caught from these structures, particularly at night. Whiting and flounder also are caught in these areas but are more a by-catch when targeting other species.

Blue swimmer crabs are plentiful in any areas of deeper water in the lake. The black dot references on the map from 13 to 4 are not only excellent fishing spots but are also top crab areas.

The best baits at Lake Macquarie are live or frozen poddy mullet, yellowtail and fresh mullet strips. Bloodworms and tubeworms are also top baits that attract almost any of the estuary species. And, last but not least, fresh green weed is best for luderick.

Cold Tree Creek joins the lake and the Belmont Wetlands, and usually has a healthy supply of poddy mullet. The best spots to try are where the creek enters the lake, and also under the bridge over the Pacific Highway. Catching poddies can be a ‘hit and miss’, but my best results have come from using the clear plastic traps available from tackle shops.

No 13 – Flathead bream and snapper. Mulloway at night close to Wangi Wangi point.

No 29. to 30 – Flathead, bream and whiting. Small squire can be a problem in this area, so use a small sinker and the tougher baits such as squid to help to get the bait down to the bottom

No 3. to 4 – Bream, snapper and mulloway. These locations are best fished at night or early in the morning.

No 13 through to No 4 – These areas are excellent waters for blue swimmer crabs and squid during the warmer months.

1) Where the trip begins. The boat ramp at the end of Lake Road Swansea, with the markers heading out toward Wangi Wangi Point.

2) A nice bag of bream caught on the incoming tide along the drop-over.

3) Huge lizards like this one haunt the deeper waters of Lake Macquarie. Shirley captured this monster in 10 metres of water on a hand line using strip mullet for bait. 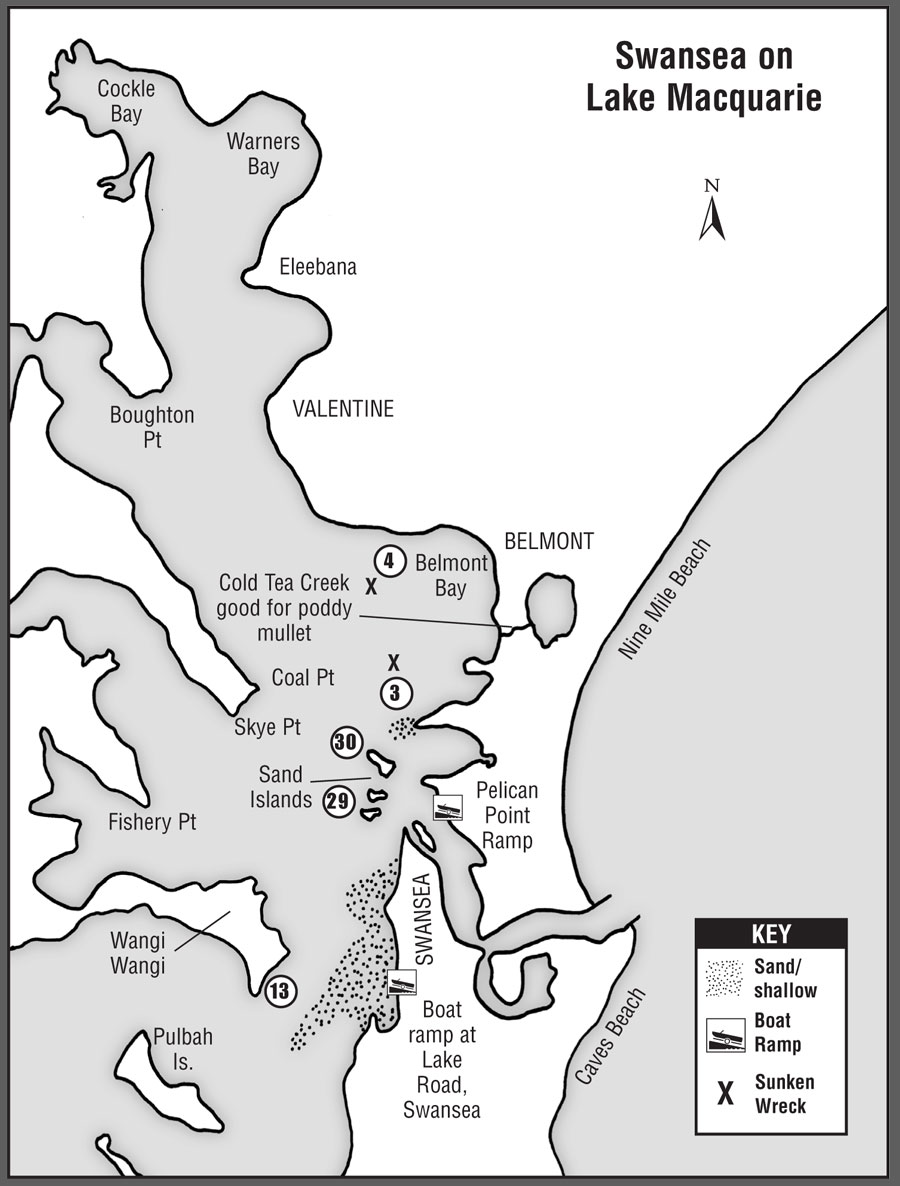